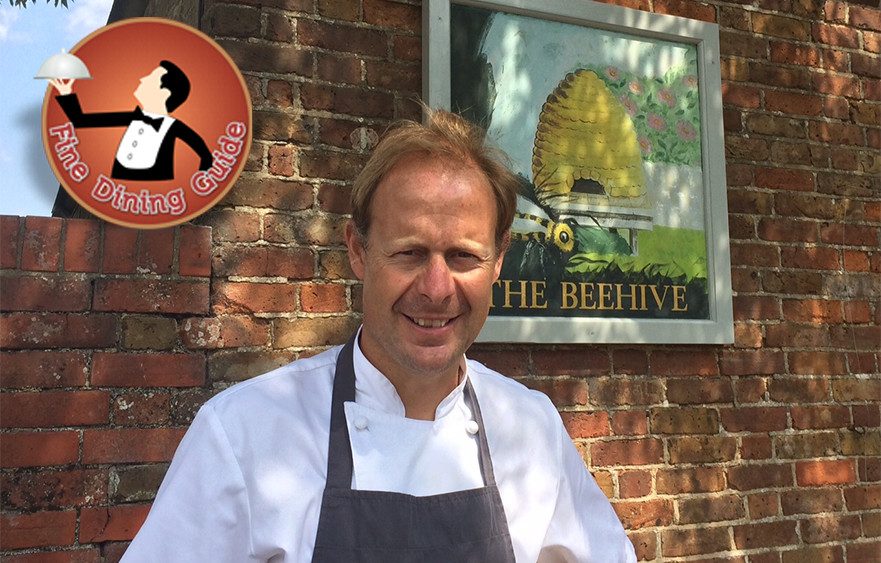 Foodies in the Maidenhead area face an embarrassment of riches when dining out. The 2016 Good Guide lists no less than 11 entries within a few miles radius of the town centre. Disregarding the four restaurants with Michelin stars, the standard of cooking amongst the rest is remarkably high; indeed, it has to be given the well-heeled, knowledgeable diners who live in this affluent area.

Foremost in the competitive market of food-led pubs is the Beehive in White Waltham. Since opening in August 2014 it has attracted serious attention from locals and those from further afield. This is largely because its chef patron Dominic Chapman has a distinguished pedigree with many loyal followers. He benefits from an impeccable background in hospitality: His family has owned the acclaimed Castle Hotel in Taunton for over 65 years and his father is a chef and author. Having cooked in the kitchens of heavyweights such at Rowley Leigh (at Kensington Place) and Heston Blumenthal (the Fat Duck in its early days and the Hind’s Head – his first head chef position), he was awarded a Michelin Star, three AA rosettes and 6/10 in the Good Food Guide during his seven years at the Royal Oak in nearby Paley Street.

The challenge of running his own place proved irresistible, hence his move to the Beehive. Here, he has maintained the sense of community successfully nurtured over 15 years by the previous owners. The annual cricket match in June, complete with hog roast, refreshments and live music, helps to cement this. Locals can pop in for a drink, not deterred by the need to have a meal as is the case in many pubs with restaurants. Alicia Corlett’s extensive experience in high end restaurants, enables her to lead a front of house team which is both relaxed and professional. A good memory for names and faces ensures a warm welcome to those revisiting. Service is knowledgeable, solicitous and unobtrusive.

The food offering is flexible, with a wide choice from the bar and a la carte menu. Bar snacks including Scotch eggs and Lincolnshire Poacher “Welsh Rarebit” are £3.50 with larger dishes like steak sandwich with tomatoes and rocket at £10.95.

I once had withdrawal symptoms for a hamburger and did not regret my choice of a one course meal. The juicy, well-seasoned patty, proper fries and delectably crisp onion rings in panko breadcrumbs outclassed anything similar produced in those high end chains which are now so fashionable.

On the restaurant menu, the provenance of meat and fish is clearly displayed, indicating the importance of top quality ingredients sourced from a network of trusted suppliers, built up over the years. Starters are priced from £6. 95 to £10.95, mains from £14.95 to £24.00, and desserts from £6.95 to £8.00. These are realistic and affordable, given the excellence of ingredients and the skill in cooking. A choice of eight dishes in each course ensures there is something for all tastes. Three daily specials, one for each course, make decisions even harder. There is no need to choose three courses, although once the menu is scrutinised, few can resist.

Dishes on a summer menu range from those which have comfort food appeal, such as “Fish n chips”, mushy peas and tartare sauce or Stream Farm chicken, ham and leek pie with mashed potato, to more sophisticated, fine-dining offerings such as Peppered haunch of Denham Estate venison, creamed spinach and sauce poivrade.

Although a sound classical base underpins the precise cooking, clear flavours and textural harmony of the dishes, a degree of international influence can be seen in dishes such as Fillet of Sea Bream with Tarka Dhal, cucumber, red onion and coriander salad.

Desserts are primarily British classics such as Blackberry trifle or Bramley apple crumble with custard, but no less distinguished. A highly refined version of Baked Alaska was enjoyed on an previous visit. Presentation is clean and unfussy often with a rustic theme.

On a previous visit, I savoured a signature dish is Lasagne of wild rabbit with Wood Blewits and chervil. The silky smooth pasta, encasing the moist, flavoursome pulled rabbit dressed in a rich, creamy sauce enhanced by the earthiness of wild mushrooms and the gentle aniseed fragrance of chervil, made this a dish that would be hard to take off the menu.

A recent impromptu lunch on the hottest day of the year proved memorable more for culinary delight than the heat and humidity.

A starter of chicken liver and foie gras parfait had been properly marinaded, seasoned and sieved. The velvety texture and intense, creamy flavour of the pureed offal made it a model of its kind. A lively – over sweet? – fig chutney helped cut the richness, whilst a scattering of chopped chives added a welcome, gentle onion note. Lightly toasted sourdough was probably a better vehicle for spreading the delectable parfait than the billed toasted brioche, which sometimes can make this classic combination a little TOO rich.